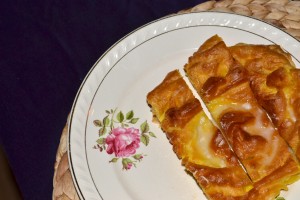 Oddly enough named Waleskringle – I have no idea where the name comes from. If I were to hazard a guess, as it is an old Danish dessert, I would guess that it might have been named when Princess Alexandra of Denmark married the Prince of Wales, although one dictionary say that it is an old Welsh dessert… Can anyone shed some light?

This is actually a family recipe. My grandmother dictated it to my Dad when he went off to uni, so he’d be able to make it himself. Whenever we would stop at my paternal great aunt’s house, we would also get it – and it would get scarfed down like we were wild animals in training.

It is basically a profiterole dough, but instead of making profiteroles, you make three rectangular stripes of dough.

My grandmother’s recipe did not include the frozen puffed pastry underneath – I’ve seen other recipes with it, so I thought I would try. Include, exclude – it makes very little difference to the end result.

Other recipes include filling it with custard or jam – we’ve never had that, so I didn’t try doing it this time around.

If using: 150 g of puff pastry sheets. (It was 3 frozen sheets for me – but I know this might be dependent on how large the sheets are.)

1. If using. Roll the puff pastry out in three roughly equal length to have on a cookie sheet.  Heat the oven to 210 degrees celcius.

3. Add the flour quickly once the margarine/water boils.

4. Mix well, until the porridge has been brought together and “lets go” easily of the bottom of the saucepan.

6. 1 at the time: Whisk 1 egg slightly with a fork and add to the porridge – and incorporate well before adding the next one. Repeat with all four eggs. The mixture shouldn’t be too thin.

8. Cook in the middle of the oven at 210 degrees celsius for 20-30 minutes – DON’T OPEN THE OVEN DOOR UNTIL AT LEAST 20 MINUTES HAVE PASSED!

9. Let cool slightly in the oven before taking them out – otherwise they will fall together. (They’ll still taste yummy, but fall together.)

10. Once cool – mix a bit of powdered sugar and water together for a glaze and drizzle over the finished product.