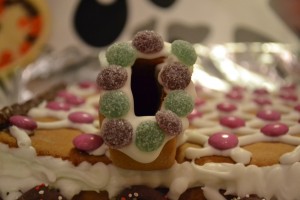 Last year’s Gingerbread house, seen from the top. Although the houses were successful from an aesthetic perspective, they were less good to eat a month after they were made, when they were as hard as Hagrid’s rock cakes.

This year, we’ll use the pre-made versions and decorate them instead.