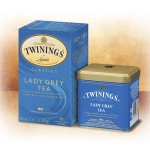 Maybe there is something about being a librarian… Most of the places I’ve worked, where there have been a large librarian population – tea breaks have been the norm, not coffee breaks. When I was out on work placement in the UK, I noted that my supervisor and colleagues were adamant that I take my allotted two daily tea breaks. And it was almost as though the heavens would come down if I didn’t.

(This might have just been about being British, though… Anyone?)

Even now, we usually have our daily tea break in the afternoon.

One of my favorite teas is Twinings Lady Grey. The smell of it is simply fantastic – and it tastes quite good too. For someone with a sweet tooth, it is a good way to avoid sugar, as there is a slightly sweet taste to it.

Anyone else have teas to recommend? I figure we’re heading into the time of year when having hot beverages around is one of the things that makes it bearable.