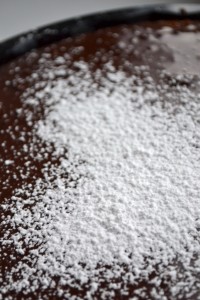 The February recipe in the BBC GoodFood calendar was the Squidgy chocolate & pomegranate torte.

My pomegranate wasn’t tasting as it should, so what ended up on the table was just the torte itself with the ganache.

I also don’t have access to a food processor at the moment, so I used my blender to blitz the almonds. It may have resulted in slightly bigger pieces, but not by much.

I brought the resulting cake with me to work, where it was promptly devoured. I even spotted some of my colleagues scraping the tin. The latter may be a sign that it should go on the list of cakes to make again.