Butter is one of those things I’ve been wanting to make for a while.

My mother used to warn me (and I believe that it also says so on the cream carton) that if I whipped the cream too much, it would turn into butter.

I was curious to see how long it took.

The answer – disturbingly little time. (Definitely going to be minding the time when I whip cream from now on.)

I used the recipe from The Traveler’s lunchbox. as a base. I essentially used the cream I had in the house (0.5 liter), which was about to go bad – so I had to use it for something… 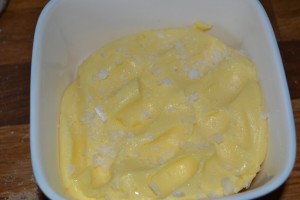 I would probably have ended with a better result if I had gone to a farm for cream, and less-processed, more natural yogurt, for the recipe, but what I got with store-bought cream and yogurt was pretty good.

I sprinkled it with Maldon sea salt.

At least on a slice of rye bread, with some rhubarb jam on the side. Rye bread aside, it tasted like France.