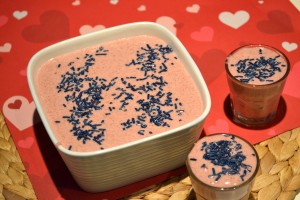 In my quest to explore the traditional Norwegian cuisine, the time had come to do Russedessert. Essentially, it is cordial mixed with water and semolina (and possibly also sugar) on the stovetop until it has congealed and then once it has cooled, it is whisked into a creamy pudding.

The recipe was in my grandmother’s cookbook, but as I wasn’t interested in feeding a family of a hundred… (Slight exaggeration, but the economic cookbook from late 1920, early 1930 is all about feeding many people, cheaply.) I went elsewhere. This recipe in Norwegian states that it is for four people.

sugar to taste. (since my cordial was very sweet, I omitted the sugar.)

Serve with cream or vanilla sauce.

1. Combine all the ingredients in a pot. Make sure the semolina is mixed well into the liquid.

2. Set the pot on the stovetop and bring the mixture to boil while stirring.

5. Whisk it (preferably by machine.) It should lighten in colour and become like whipped cream in texture.

Note: I think this is probably a taste thing. I did not particularly care for it, and it might be because I’m not a huge fan of the semolina pudding texture. If I were to make it again, I would probably add some fruit to match the type of cordial used for a bit more interesting texture and flavour.

But it was easy to make, took next to no time and is pink.