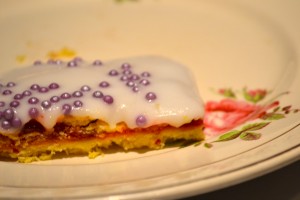 Apart from the people, (and how flat it is, so you can easily bike anywhere) the thing I miss about Copenhagen most frequently, is how you can walk into a 7-11 and get rather decent pastry. Sure, it’s probably better at the local bakery or bakeshop, but the 7-11 is almost everywhere and open when the other places aren’t.

In Norway… well,  the pastry is okay at 7-11 here as well.  But true to Norwegian traditions, it is mostly buns and cinnamon buns, and more doughy buns. (It has branched out to cookies, it should be said.) But it isn’t that flaky, Danish pastry that is so delicious and leaves crumbs everywhere.

Another thing that is missing is the raspberry slice.

Americans will probably say that it looks like a home made pop tart. Which it kind of does, except the pop tarts I’ve had have been closed at the edges. This isn’t that.

I went back and forth on which recipe I should try. And I decided to adapt a grandmother recipe. Not my grandmother’s recipe, as she isn’t Danish. But the one posted by Lone Landmand here.

Raspberry jam.  (Mine was shop bought. I have yet to get to the stage where I make my own jams)

2. Add the egg yolks and mix until it has started to come together to a dough.

3. Tilt the dough from the food processor onto waxed parchment paper.

4. Mix together to a dough ball, (crumbs and everything that didn’t quite come together in the food processor).

6. Start pressing the dough out into squares to get a bit of shape into them.

7. Cool both squares in the refrigerator (or somewhere else cool) for an hour.

9. Take one of the squares out of the oven, and with a rolling pin, roll out until the square measures 25 by 30 cm. It helps in the rolling process if you add a piece of waxed parchment paper between the dough and the rolling pin – so it doesn’t stick.

10. Set the shortbread square into the oven for 12 minutes.

11. Take the other square out of the refrigerator, and repeat #9. (It is fairly important that the two squares are somewhat equal in size, as you’re going to essentially make a raspberry jam sandwich with the two shortbread pieces. )

12. Once the first shortbread piece is out of the oven, set it to cool and put the last one in for 12 minutes.

14. Make the glaze by combining 400 g of powdered sugar, the juice of 1 lemon and a couple of tsp of water. The mix should not be runny.

15. Once the shortbread pieces are cool, add raspberry jam to the top of one of them. Add enough so that the bottom piece is properly covered, but not so much that it is a very thick layer (it will only get squeezed out on the sides as you add the top shortbread piece.)

16. Add the top shortbread piece – carefully!. (Mine broke. In many pieces. But that’s not a big thing, because 1) there is the glaze that goes on top, and 2) you’ll be cutting the pieces into squares anyway. But try to avoid repeating my mistakes if you can.)

17. Add the glaze on top, along with some colorful sprinkles if you have them.

18. Cut into squares. Since the glaze makes the whole thing fairly sweet, avoid making them too big.