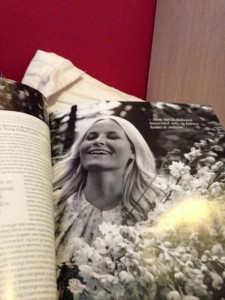 Crown Princess  Mette-Marit is the cover girl on the September issue of Norwegian Elle.

They made a fairly big deal that the coverage was to honour the Crown Princess on her 40th birthday.

Inside the magazine there were two photos from an earlier photo session that had been reserved especially for the Elle issue.

It had also come out in the media beforehand that Marit Tjessem, Mette-Marit’s mother, had been interviewed, for (allegedly) the first time ever… (If I recall right, she did talk in one of the documentaries a couple of years ago…)

The whole thing is four pages, and three of those pages are the pictures.

Marit Tjessem’s “interview” is a paragraph. Which is okay enough, she’s talking about how proud she is of her daughter, for the things she has worked on over the years and how good she is about getting in touch with people which is an important part of her life. She loves her family, her children and she has a lot of care for her mother.

“Today, she comes across as knowledgable, with a good Master of Management degree. She’s a good writer, resourceful, and competitive.” – Marit Tjessem

The other friends and acquaintances who wrote birthday greetings to the Crown Princess was Peter Dundas of Pucci, Michael Sidibè of UNAIDS, a woman from Arbeidsinsituttet in Buskerud county (an organisation that works with the Crown Princely couple foundation), the photographer who took the pictures, and Mina Al-Oraibi, who got to know Mette-Marit through Young Global Leaders.

“It is impossible to know Mette without knowing Haakon, who in everything is her second half. The two of them complement each other in a rare manner.” – Mina Al-Oraibi

There are some nice things being said, but for me it feels like too little content for justifying putting Mette-Marit on the cover. Especially since they have a six page extensive interview with Maria Mena following it on the next page.

I guess the final conclusion from me is that it is very underwhelming. And I wish royals would stop being on magazine covers like this.