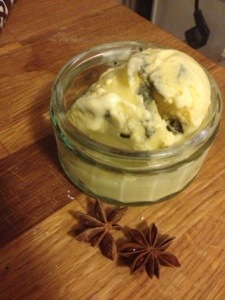 There is something utterly fascinating about the thought of anise or liquorice ice cream. The basic bitter, instead of very sweet, ice cream  leads to a disconcerting flavour profile in your mouth.

I saw this recipe first  at Klikk.no. I adapted it slightly, but if I ever make it again, I will up the amount of star anise I use. It was simply too subtle for my palate, and I ended up putting liquorice sprinkles through the ice cream after churning/before freezing.

I think that this type of almost savoury ice cream is a nice contrast to the sweeter ice creams out there.

Could just be I am partial to the flavour, though. The recipe should be easy enough to halve if you’re just wanting a small portion of it. 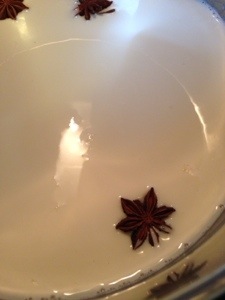 1. In a pot, heat the milk, cream and star anise until the liquid starts to bubble.

2. Remove the star anise and cool the mixture.

3. Whisk the egg yolks and sugar together in a large bowl.

4. Pour the milk/cream mixture into the egg/sugar, while stirring constantly.

6. Heat until it thickens somewhat,  approaching a custard in texture.

7. Cool the mixture quickly by placing it over ice or running cold water.

8. Add to ice cream maker and let it churn according to the maker’s instructions. If not using ice cream maker, freeze, and stir the mixture often to avoid ice crystals forming.