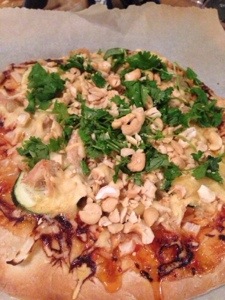 In some ways, this pizza is deceptive. The picture looks about the same as the pizza did. Not very attractive. Oh, but the taste…

It is pure deliciousness from the first bite.

There might have been leftovers for the next day (since I can’t eat a whole of these pizzas by myself at one time), which I promptly devoured cold. (The flat I’m subletting doesn’t have a microwave.)

Anyway. it is the Thai Chicken Pizza from Annie’s Eats. My modifications were inspired by the Norwegian pizza chain, Dolly Dimple, which has a pizza called Thai Summer II.  The dough recipe (utter carb-y delciousness) makes two pizzas. I froze half of the dough, and will be using that on a later occasion with different topping.

A couple of notes.

I have omitted some spices, because I didn’t have them on hand.

For the cheese, go as wild or as generic as you’d like.

I don’t have a pizza stone, so I baked it on a baking sheet instead.

My oven don’t reach 500 F, so I went as high as my oven did, and modified the timing accordingly.