Well, I started out, intending to make Baked Beet Chips.

Then came an unfortunate accident with my mandoline slicer, in which I sliced off a piece of my right thumb. Which, actually is even less fun than it sounds. And it does not sound like fun at all.

Rushing around, trying to stop the flow of blood, trying to Google what to do (beyond clean the wound, hold something over it, and bandage it), and then realizing that Googling anything health related will just have me mentally in the hospital ward before the blood has even stopped. I bandaged it up with gauze, and tried to ice it a bit at the same time.

And I did what I normally do. I called my mom.

This would make sense if she was a trained medical professional, but she is a stay-at-home preschool teacher whose four children have never been very prone to injuries (and when we were injured or ill, we were packed off to a neighbor who was a doctor.) She didn’t know, but suggested I call the emergency clinic and ask what to do.

A visit to the emergency clinic and I had a clean wound, a smaller bandage and an admonishment to get my tetanus shots up to date within 72 hours. 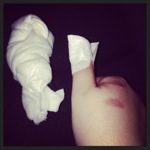 That white lump is the bandage I had put on myself. The small white bit is the one the nurse put on at the clinic. Difference, no?

But once I returned home, I spied the beets that had been mandolined, before the blood and gore, and had not been contaminated.

I took the beet chips, turned them around in 0.5 dl olive oil, some sea salt and some pepper. Then I added them (and the olive oil) to a heated pot (as hot as I could get it.) and fried them off.

It wasn’t my original plan, but sometimes plans go astray, and the fried beet chips were pretty delicious. 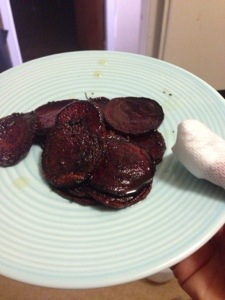