This is really a mixture of several different ice creams. I started with this tea ice cream recipe from Norwegian Klikk.no, then I spotted Mac & Cheese’s Earl Grey tea ice cream recipe. And since I was going with green tea, I also found this one by Emeril Lagasse. All of which inspired and made the end result happen. 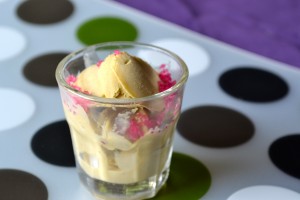 I used Kusmi Spearmint Green tea – I sometimes joke that my Master’s thesis was written while on that – but I suspect that I could well have used any other loose leaf tea for an equally interesting result. Or tea bags for a much less messy one…

How to
1. Heat up the milk, the cream, the salt and 100 g of the sugar in a saucepan.
2. Just before the mixture reaches the boiling point, add the loose leaf tea. Take it off the heat and let it steep for three-four minutes.
3. Meanwhile, in a bowl take the rest of the sugar and the egg yolks and whisk to a froth.
4. Strain the tea leaves from the milk mixture into a separate bowl using a fine mesh strainer.
5. Add before adding a bit of the milk slowly to the egg mixture.
Rewarm tea-infused milk. Whisk egg yolks together in a separate bowl. Slowly pour the milk mixture into the bowl with egg yolks, whisking constantly.
Return the milk and egg mixture to the saucepan, and cook over medium heat, stirring and scrapping the bottom of the pan constantly until the mixture thickens to a custard and coats the spatula.
Cool the mixture, and freeze in your ice cream maker.