A friend of mine, B, is home from work on maternity leave. She just moved to the area and is going stir crazy with two kids under four at home. The three year old is desperate  for some day-time activities. With the ice cream kick I’ve been on lately, I suggested bringing some over to enjoy.

The only problem is that B is lactose intolerant. So, the traditional ice creams are usually out for her. She said sorbets are fine, but I wanted to try something different. 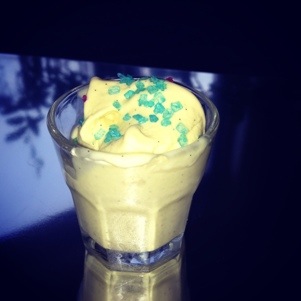 I really hadn’t planned on making vanilla ice cream as there is usually so many different tasty ones available in store, but considering that B cannot go to regular stores in Norway and get it – it seemed appropriate to try to make an alternative for her.

I replaced the cream and milk in this recipe with canned coconut milk.

The recipe is adapted from the book Sweet cream and sugar cones.

How to…
1. Add the coconut milk, 60 g of sugar, and the salt to a saucepan.
2. Split the vanilla bean lengthwise and scrape out the seeds. Add both seeds and pod to the saucepan.
3. Bring the saucepan up to a boil by using medium heat, then take it off the heat.
4. Cover the pan and let the coconut milk mixture steep for 30 minutes.
5. While that is steeping, whisk the yolks together with the rest of the sugar in a separate bowl until well combined. Set aside.
6. Take the lid off the pan, and put it back on medium-high heat. Once it starts to simmer, reduce the heat.
7. Add 100 ml (approximately), gradually, of the coconut milk mixture to the eggs, whisking as you’re incorporating it. (An electronic whisk makes this much easier than a manual one. I tried both.)
8. Mix the egg mixture carefully into the saucepan. (I used the electric whisk here as well, to ensure that the milk was cooling down a bit whilst the eggs were being incorporated.)
9. Let it cook over medium heat, stirring continually until the mixture thickens.
10. Strain the base through a fine-mesh strainer into a clean bowl. Cool it down a bit before putting it into the refrigerator.
11. Refrigerate until cool.
12. Blend in the vanilla extract.
13. Freeze in the ice cream machine.

Tastewise: I can still taste that coconut milk is involved, but it still tastes like vanilla ice cream and it was super creamy. B was very happy with it.