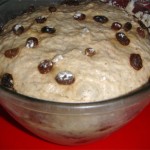 Back in July, watching the television coverage from the Oslo bombings and the Utøya shootings. I was sitting in front of the television set the entire Saturday… and in the evening, I felt like I had to do something else. Being on the other side of the country, unable to help anyone on the Eastern parts; I chose to make bagels.

There is something ultimately satisfying about kneading a dough and getting out a bit of frustration in that way, if you know what I mean.

I haven’t taken a picture of my efforts, since I’m apparently hopeless when it comes to shaping bagels, but I ended up eating them over the following week – and they were really tasty,.

I used the recipe from Brown Eyed Baker here.