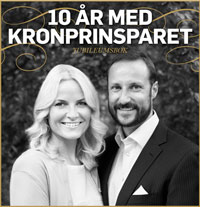 This August, ten years have passed since Crown Prince Haakon married Mette-Marit Tjessem Høiby in Oslo Cathedral. A slew of books (okay, three, so far) are coming out, two television specials are coming later this month, and the couple are also being interviewed left and right about the past ten years, and their causes.

The first book I picked up is 10 år med Kronprinsparet by Elsebeth Danielsen. It is published on Aller forlag, and part of the proceedings from the book will go to the Crown Princely Couple’s Humanitarian Foundation.

It is not a huge book by any means; at 118 pages, most of the chapters are about 1-2 pages, and the majority of the book consist of pictures. Great pictures, but almost all of them have been seen before in some context or other. Similarly, the text feels more like a synopsis of other sources (listed in the back) than original interviews with the couple.

It starts out with that defining day in the Cathedral, a chapter on the wedding gown, and then moves on to Mette-Marit’s adaption to royal life, the causes she’s taken up, the family life, fashion, her work with the religious CD and at the end there is a list of the patronages and orders of Haakon and Mette-Marit. The focus is chiefly the beginning, the trip to Malawi in 2005 and the last years.

The book gives a neat overview of ten years in 118 pages, but for most of those pages, the person covered is Mette-Marit only. Haakon’s Wedding speech, his Dignity Day cause, and his interview about what kind of music he listens to… are the really stand out issues about him in the book, which isn’t a lot for ten years.

The one thing about the book that I actually really liked was that in a lot of the chapters, people associated with Mette-Marit’s causes (or once or twice from their common causes) had written messages to the couple on their anniversary, in conjunction with the cause/relevant picture in the book. This was published next to the picture/description of the cause.

It is a nice enough little  book, but given the amount of pages, it doesn’t go into much depth. Thus, if you’ve followed them over the past ten years on forums or in the news… I think you can probably save your money for something else.