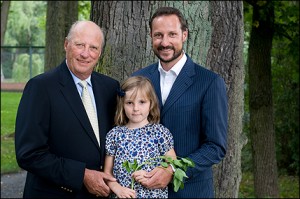 The state-owned Norwegian television channel, NRK, today reports that during a questionnaire for their programme, Spekter, 4 out of 10 of the members of parliament answered that they would rather prefer a republic in Norway. 1 of 3 said that they would transform Norway to a republic within 20 years.  And 30% of the 169 MPs said that the royal house is diminished, to a varying degree.

It is interesting to note that despite the Socialist Left’s, which is the only party to have abolishing the monarchy on the party programme, loss of seats in the recent election, there is still an increase in number of republicans.

An explanation for this might be that there are more younger representatives after this election: institutions such as the royal house have less support amongst the young than the older generations.

It may also be a reflection of the various recent press debacles involving members of the royal family, such as Princess Märtha Louise’s so-called Angel School, and the vendetta her husband played out in the press in January/February this year.

Quite a few of the official republicans, however, state that their belief that a republic will be better has nothing to do with the royal family and its members, but rather the principle of the matter.

Coming to the matter from the monarchist side – an article from NTB, has this quote from Torbjørn Røe Isaksen.

“The support of the monarchy in the population is very high, and even when it is at its lowest, there are very few who say that they would like Norway to be a republic.”

The reasons for that may be plentiful – you know what you have, but not what you’ll get, may be one of them.

The Norwegian monarchy was chosen by the people in 1905, in a referendum. One would hope, as a royal watcher as well as a Norwegian, that if there should be any major decisions about it made, that it would be up to the people once again, and not just 169 of them in a building in Oslo.