So, potato balls. How about them? Every district in Norway seem to have their own variation of these, including the name.  And there are different condiments and drinks according to where you are in the country. Even to the point where someone wrote and published a book about it.

My Dad’s cousins in Chicago (their parents emigrated from Norway before WWII before they were born) and their families eat it for May 17 celebrations. Their version has been bastardised by the American palate- and they have taken to adding cornflakes to it for additional texture.

My grandmother started making these for us when I was younger. It took me a bit of time to warm up to them, but my youngest sister would eat four for dinner, four for breakfast the next day and four for lunch, until there were no more.

Since my grandmother is in the nursing home, we dug out her recipe for making it.

750g-1 kg salt meat in serving pieces (the meat is traditionally lamb, but can be pork, depending on preference.) 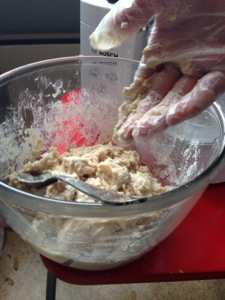 4. Combine well in a bowl, with the flour and the salt. (You can also use a food processor with a shredder attachment as step 4.b, to pass the dough through to make it more uniform, which we ended up doing, but I don’t think my grandmother did that.)

5. Peel and chop the rutabaga. Add to the pot where the meat is simmering.

6. Form the potato dough into small balls with your hands. (Plastic gloves are advisable to make it less messy.)  They should be the size of a middle-sized potato.

7. Add the potato balls to the salty water and let everything cook for 30-40 minutes. (Alternate additive here: Fry up some bacon bits to serve with.) 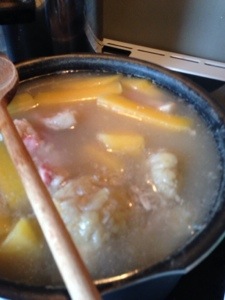 8. Take one of them out. Cut through it. If it is has the same consistency throughout, it should be done.

9. Serve, with the meat and the rutabaga.

I tend to go for both butter and sugar on my potato balls – the child of parents from two regions in Norway.

Others may serve with just butter, just sugar, lingonberries… Some swear by drinking buttermilk as they eat, others prefer milk…