I have a memory of watching my grandmother making caramel pudding in our kitchen at home. It might have been either my confirmation or my sister’s christening – since she was making it at our place and not her own. But it would also frequently be among the staples for dessert at Sunday dinner at her place. 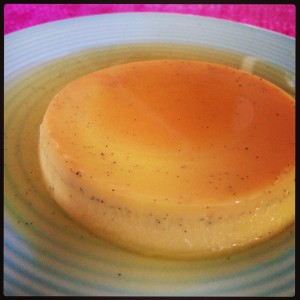 For some reason, I’ve always imagined this to be super hard to make. It looks more impressive than it really is, as it is not that hard to make, I would say.

I took a look through my grandmother’s cookbook, Økonomisk kokebok (1936), and it actually looked rather easy. Plus, a lot of the technique is the same as what I’ve been doing when making the custard for the ice cream over the summer.

The ingredients below is what I used – but when it comes to the mixture of cream and milk I would say that it is really the matter of what you have in the fridge. I had a lot of cream that was about to expire – so I used more cream than milk.

It is also originally designed to be cooked in a bread pan – rectangular shape. But I thought it would be cute to have it in more single-serving dishes, and used individual ramekins.

It has to be made a bit in advance before serving, as it has to cool completely after being in the oven in order to set. Traditional Norwegian serving of this is with whipped cream, but it is really not necessarily, in my opinion.