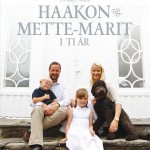 The last book reviewed for now in the category of books released for Haakon and Mette-Marit’s 10th anniversary is this book: Haakon og Mette-Marit i 10 år, by Liv Berit Tessem.

Unlike the other two books, this one is chronological. It has one chapter for each of the ten years they have been married.

I rather like this approach. It makes it easy to follow the changes and progress made over ten years. The thematic division in the other two books was good, but in a commemorative book like this, I do think this approach is a tad more interesting.

The drawback to it, however, is that each chapter just scratches the surface on much of what has happened over the years – and does not go into as much detail on some of the topics as the other books have done.

Unlike the book, where the photographer was the main contributor in the book, thus a large proportion of pictures , this is a book where the author is a journalist which is reflected in the amount of text. But there are still a good amount of pictures here.

Another item in this book I rather liked, is the lists that conclude each chapter summarizing the year’s bigger events month by month.

To sum up all three books for the international audience – if you’re not a Norwegian speaker, I would go with the pictorial book. If you have a certain level of Norwegian knowledge, this book is a bit more substantial in information. The first of them is, in my opinion, not quite up to par in comparison to the latter two.